So, How Does It Work?

It's Simple. You Eat Food.

From These Foods, Your Body Derives Important Resources.

Within these resources, the total provision of energy is either...

Obviously if you expect to see fat loss you can't be in the habit of a higher energy intake than you can put to good use. But you can't expect to stick to any dietary regime where the energy intake is not at least adequate, because you'll be miserable and end up rage quitting &/or binge eating.

But here's the thing:
To facilitate improvements in athletic performance and condition, you need to be fueled for performance and to ensure energy & resources are also available to recover from and adapt to training with prioritisation of lean mass over fat storage.

Contrary to what you'll be expected to do pretty much anywhere else; restricting to as little intake as you can get by on and a little less each time your fat loss stalls won't get it done. On this program we work on building a healthy appetite and the confidence to work closer to the most optimal levels of fueling more of the time. 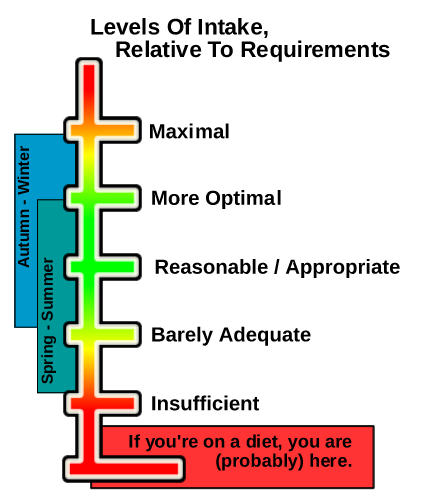 So, I'm supposed to believe I can just eat whatever junk I like and still get into shape & be healthy?

Well not exactly.
The idea is that you make some reasonable choices in advance, as part of a plan to come in on target for the day with a meal and snack schedule that suits your daily routine.

You won't come in on target for protein or fibre without making some half way reasonable choices, but if we have the right targets and come in close to them, there are no "wrong" choices that would prevent good results, and there's no harm in including a little of whatever you feel like.

OK, but I was told I need to eat clean / paleo / low carb / keto &/or do intermittent fasting, for some reason?

Eh. Here's the truth about all of those things.

If you could eat only those foods on that schedule for the rest of your life, and IF doing so happens to result in an energy intake that's not excessive but doesn't leave you famished either, and IF your personal circumstances never change... then sure.

All of that seems rather unlikely though, doesn't it? Especially if none of it sounds terribly appealing to begin with.

You'd be a lot wiser and a lot better off to just practice working to your actual requirements with the best selection of foods that actually appeal to you, on whatever schedule best suits you.

I'm on low calories but not getting anywhere. Surely I need to reduce further to get back into deficit?

When you work to a caloric deficit you will initially see fat loss as the body adapts in order to cope with the work load it becomes accustomed to on the level of energy intake it becomes accustomed to. However, at a certain point of "too far into deficit for too long" the way it copes is by limiting energy expenditure rather than pulling the amount of deficit out of fat stores the way you've been promised elsewhere.

As your consistency of attendance and your proficiency at training improves, so does the amount of energy that you could put to use increase. While we don't want to come out of deficit, working strategically to an intelligently calculated higher intake target means greater output at training, greater expenditure outside of training as you just feel like you have a bit more of a spring in your step throughout the day, and the necessary resources are actually being made available to benefit from training with the creation of a stronger athletic condition with more lean muscle & improved bone density at the expense of fat stores.

Understand that extreme restriction only promotes the opposite of this.

So eat more and eat whatever you like?
Sounds too good to be true. Sounds like maybe you're just telling people what they want to hear?

Nah.
What most people want to hear is more like "just cut out this one ingredient, eat this other thing instead, you don't even need to do any exercise" and so on.

This is for people who actually want to learn how things work, so that they can do what it takes. There are no easy answers other than this; you need to be enthusiastic to show up and try your best at training, with a productive strategy. You need to be prepared to sit down and make some decisions about what meal schedule is going to suit you and what are some reasonable choices of meals and snacks that you'll be able to work with. You need to check in with me regularly to let me know how you're doing and if there's anything you need some help with.

There are no easy answers that don't require making the effort, but if you're serious and enthusiastic there's really nothing unreasonable required either.